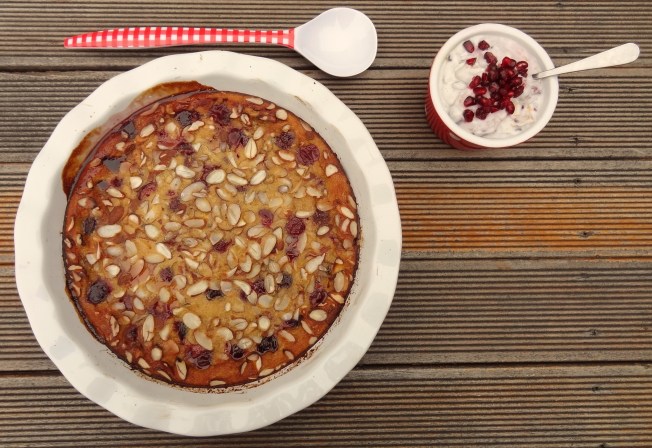 To me, there is nothing more quintessentially French than clafoutis. The wunderkind of French desserts, clafoutis (kla-foo-tee) lies somewhere between a frangapine tart and a baked custard. Clafoutis hails from the Limousin region of France and is traditionally baked with the pits of the cherries still in tact, in order to ‘saveur le flavour’. To protect your precious pearly whites, my recipe requires the pits to be laboriously removed. This initial slaving over the stove is short-lived, as the simplicity of this dessert is its saving grace. A spread, a splash, a whisk, a sprinkle and viola! Pop it in the oven and await the sweet cherry almond scent to permeate the house.

Cherries are aplenty right now. The cream of the crop are grown in Central Otago, just a few hours away from where we live in Dunedin (New Zealand). These cherries are renowned for being the sweetest, juiciest, shiniest you’ve ever had the pleasure of laying your mitts on. Cherries are however not just a pretty face – they are one of Mother Earth’s most powerful anti-inflammatory sources due to the presence of anthocyanins, which research has unveiled prevents free radical damage and improves memory. Cherries also contain melatonin, a hormone which assists in regulating sleep cycles.

I’ve made this dessert with almond milk which works superbly, but clafoutis also works well with other milks especially cow’s milk. I’ve adapted the recipe from the Australian Taste website and given their clafoutis recipe a Super Foodie makeover, ensuring the recipe is dairy-free (if you prefer), gluten-free and using a minimally refined sugar. I’ve used coconut palm sugar, but you can use any sugar you like, as long as it’s not the over-processed, bleached and filtered white variety. Coconut palm sugar is made from coconut tree nectar and has a naturally low glycemic index compared to other sugars. It also has a higher nutrient content and is a source of potassium, zinc, iron and magnesium. When choosing coconut palm sugar, ensure it is the purest you can find in the organic section, as some brands can be mixed with cane sugar.

This photo was taken by my delightfully Hilarious Sidekick Rachael Lawrence Lodge, who provided the creative direction for the shoot. Before we demolished the clafoutis, naturally. Dankeschön, Liebling!

Coconut oil for greasing the dish

2/3 of a cup of ground almonds

1/2 a cup of coconut palm sugar or coconut sugar

A tablespoon of honey

A vanilla pod, deseeded or a teaspoon of vanilla essence or paste

The zest of a lemon

A can of refrigerated coconut cream

A vanilla pod, deseeded or a teaspoon of vanilla essence or paste

The zest of a lemon

A teaspoon of honey

1/3 of a cup of sliced almonds

A sprinkling of fruit, a sprig of fresh mint or lemon zest for garnishing

Heat the oven to 180 degrees. In a frying pan, toast the almonds until golden brown and allow to cool. Grease a large dish with coconut oil. Pit the cherries and place evenly in the greased dish. In a bowl, mix the ground almonds and sugar together and form a well.

In a jug, whisk the eggs and add the almond milk, vanilla and the zest of one of the lemons. Gently pour the liquid into the sugar and almond well and combine. Pour into the dish and sprinkle with toasted almond flakes.

Cook for 30 minutes or until the middle is springy. Allow to cool until slightly warm.

Separate the creamiest part of the coconut cream by gently spooning it out of the refrigerated can (use the  surplus liquid for smoothies or Banana, Date and Coconut Baked Porridge).

Add the vanilla, zest of the second lemon and honey and whisk to form peaks. Transfer into a serving bowl and refrigerate. Garnish with whatever you please and serve with the warm clafoutis. Bon Appetit! 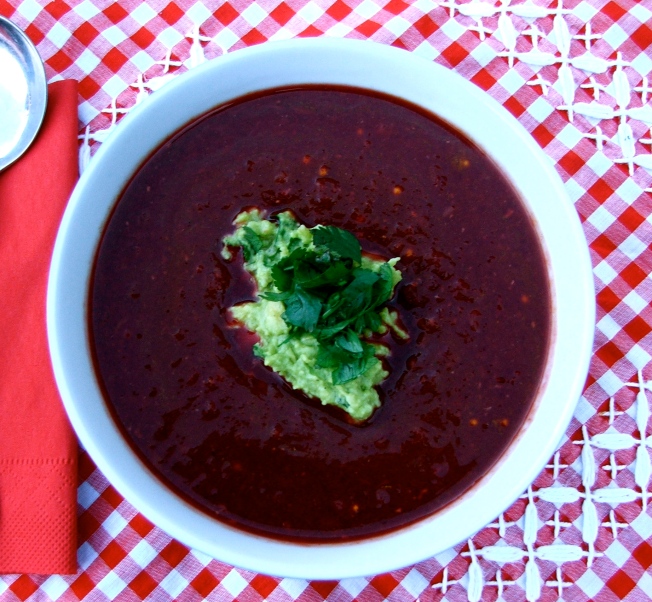 We’ve just returned home to Dunedin from an incredibly inspiring three month adventure in Europe, gratefully avoiding the bitter winter in New Zealand.  Apart from a few blustery days in Norway and England, we were basking in the warm European summer the entire time. Now that we’re home I’m acclimatising, as even though it’s officially spring, the warm weather doesn’t usually kick in until later in the summer – occasionally not until autumn. What I’ve been craving upon returning is a warming dahl to heat me from the inside out and provide a rejuvenating boost of nutrients which my body demands after living the good life in Europe.

I’m a big fan of beetroot and its incredible health benefits and antioxidant properties, which you can read about in my recipe for Beetroot, Feta and Mint Salad with Orange and Tahini Dressing. Another super food wunderkind is pumpkin, a highly nutritious vegetable that lends itself perfectly to a hearty dahl. Pumpkin is a low-calorie staple which is both filling and high in dietary fibre, which assists in lowering bad LDL cholesterol levels. Pumpkin’s bright orange colour is from its high concentration of carotenoids, which repel free radicals in the body and help prevent cardiovascular disease and other infections. Pumpkin is a good source of vitamin A and vitamin C, both of which boost the immune system, perfect for the inconsistent weather. It’s also a natural diuretic, which flushes out toxins and waste material from the body, leaving you spring-cleaned and detoxified.

This recipe was created completely by chance as I had to use up some of the tired looking veggies I’d all but abandoned at the bottom of the fridge. The beetroot gives the traditional pumpkin dahl recipe a beautiful depth of flavour and the ruby red colour is pure delight. The avocado also adds a rich creaminess which satisfies on a cosy night in. Thankfully beetroot and pumpkin are still in season, so make the most of it while it lasts. Serve the dahl with brown rice, quinoa or with soldiers (fingers of toast) drizzled with olive oil.

Beetroot and Pumpkin Dahl with Smashed Avocado and Coriander

Olive oil, plus extra for the smashed avocado

A teaspoon of tumeric, ground

A teaspoon of cinnamon

In a saucepan, cook the lentils in water until tender. In another large saucepan, heat the olive oil to a medium temperature. Add the diced onion and cook until translucent. Add the crushed garlic and cook for another minute. Lightly ground the spices in a mortar and pestle and add to the saucepan and cook for a couple of minutes, stirring frequently. Add the pumpkin and beetroot and sauté for a minute or so. Add the water, bouillon cubes, salt and pepper and stir well. Bring to the boil and allow to simmer for about 40-50 minutes, until the vegetables are cooked and the flavors have developed. Puree with a stick blender, then add the lentils and cook for a further 5 minutes.

In a mortar and pestle or bowl, smash the avocado flesh, olive oil and coriander until a smooth consistency is reached. Arrange a good portion of dahl in a bowl with the chosen accompaniment. Place a spoonful of the smashed avocado with coriander on top of the dahl and garnish with more chopped coriander. Enjoy the warmth whilst dreaming of the forthcoming summer sun.